Public and private bodies: the politics of child sexual abuse

In response to the recent focus on child sexual abuse within football Jenny Pearce and Lucie Shuker argue that society has to face the reality of child sexual abuse if we are to meaningfully engage with the kinds of change needed to prevent it happening, or respond without causing more distress.

The recent disclosures from footballers about their horrendous experiences of child sexual abuse  raise the question: ‘How is it that this level of abuse has been hidden for so long?’

Theories explaining the cause and perpetuation of child sexual abuse include psychoanalytic, psycho-social, gender informed, ecological, economic and environmental perspectives. While these different theoretical approaches help inform our understanding of why abuse happens, we want to think here about what our society needs to do to help raise awareness of the scale,  nature and impact of the abuse. UK campaigners know from retrospective studies that a minimum of  1 in 20 people have experienced sexual abuse (Radford et al 2011); The Council of Europe are campaigning for recognition that 1 in 5 children experience sexual violence and the UK Government has identified Child sexual abuse as one of three main national threats. How it then that sexual abuse of children is remains so hidden and silent?

To explore this question we want to look at the relationship between the body of society and the body of the abused child.  That is, we want to look at the way that the main body of society has silenced, denied and been fearful of child sexual abuse and the way that the abused child is also silenced. Recent accounts from footballers in the news remind us of the way that abusers, including sometimes those in strategically/institutionally powerful positions, use their status to keep the child stuck in fear. If the child, or later, the adult, does overcome this and disclose, they become the isolated embodied image of the thing that the rest of us struggle to believe, understand or tolerate. Although some of the ‘general public’ respond with sensitivity, the abuse remains isolated as the property of the abused. Responsibility for sharing the pain and addressing its causes and outcomes is shelved as the main body of society looks on at the ‘other’ : the person directly affected by the abuse.

Exploring this some more, it is helpful to look at the child protection system. In the main, child sexual abuse is understood to be ‘dealt with’ by the child protection system, which metaphorically ‘holds’ specialist practitioners working with the known cases of abuse. Andrew Cooper (2014) has argued that the child protection system has two functions: one is to protect children from abuse; the other is to relieve the rest of society from having to worry about it. While we have a child protection system that, we hope, (just about) functions to manage abuse that is known about, the main body of society is relieved from having to address it: turning its back on the unpalatable and horrendous reality of abuse of children. While Cooper is referring to all forms of child abuse, we want here to focus on the specific dynamics associated with child sexual abuse, noting the overarching hesitancy to talk about children, abuse and sex in the same breath.

The diagram below tries to show how the social body and the body of a child is expected to be free from sexual abuse. If the child is sexually abused, they may be forced, or may try themselves, to keep it quiet, contain it in a part of themselves hidden away from view. It has long been noted that many children may try to suppress the impact of sexualised trauma (Finklehor and Browne, 1986) due to, amongst other dynamics, a fear of disbelief and / or a hope that the overwhelmingly confusing and painful feelings may be hidden, and eventually perhaps even go away. If they do disclose the abuse, a challenging and sometimes problematic relationship may arise between themselves, family or carers and the child protection system. This is represented in the diagram by a crooked line, suggesting that the process and management of disclosure is never a straightforward or linear process. It depends upon the skills and expertise of practitioners, the support available to them and the availability of longer term support for all concerned. Children’s  disclosures can be fragmented, interrupted or retracted against the fear and reality of things potentially getting worse. 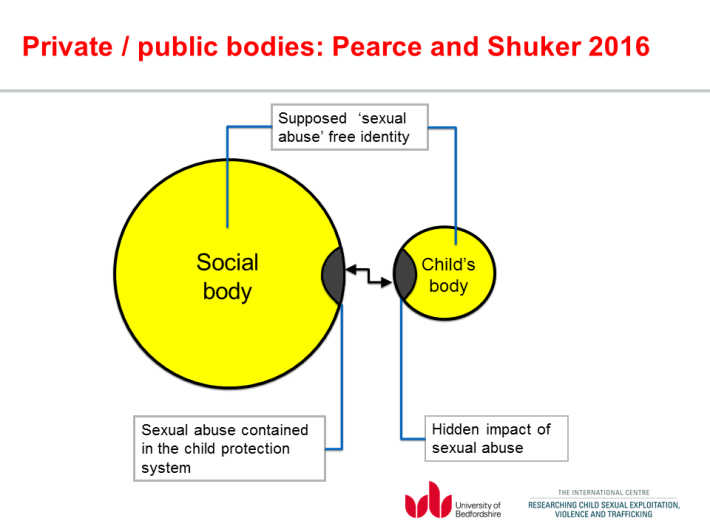 Child sexual abuse is only really openly acknowledged within the broader social body when scandals, such as Jimmy Saville or a football ‘crisis’, break into public consciousness and force us to discuss it, in shocked voices. The precarious boundary around the child protection system is exposed, and it is as if the internal boundary holding the contained impact of abuse within the body of the abused child or adult is broken. As a result, the child or adult who has been abused becomes identified as the representative body of all the things that society has hitherto turned its back on. From here on, whether or not the disclosing child or adult wants to be labelled and perceived as a victim, they are seen this way: other identities of self that had been apparent before disclosure become side-lined.

We do need better knowledge of and resources for specialist services to support children and adults who have been affected by sexual abuse, but we also need a society that opens its eyes to the reality of child sexual abuse, taking responsibility to share ownership and act to prevent it. We need a society that understands sexual abuse as a systemic problem, not just a problem of one or two individuals affected. We must stop placing the responsibility to cope on the single body of the abused child and on a stretched child protection system.  The main body of society itself needs to take responsibility for the damages within it: the potential young perpetrators, the commercialisation of sex, the gendered nature of sexual abuse, the impact of inter-generational emotional, physical, environmental neglect, the inability to talk openly about relationships between sex, power, abuse and childhood.

It has just been announced that still there will be no compulsory sex and relationship education in schools. It continues to be too dangerous for us to educate all children about the dangers of sexual abuse. We still shy away from helping children understand what to do if they are affected by sexual violence, either as actual or potential victims or perpetrators. What is it going to take before we acknowledge that we fail children while society is in denial? The revelations of the courageous people who are currently exposing the nature and extent of the abuse they experienced as children should compel the body of society to engage with the pain it is holding. If this does not happen we will continue to allow children to be sexually abused.

Cooper, A (2014) A Short Psychosocial History of British Child Abuse and Protection: Case Studies in Problems of Mourning in the Public Sphere In Journal of Social Work Practice  Psychotherapeutic Approaches in Health, Welfare and the Community Volume 28, 2014 – Issue 3: Child Protection after Munro – Reflections Three Years On